Concerned residents, environmentalists and sportsmen said they will continue to pressure the U.S. Army Corps of Engineers over a controversial beach replenishment project that may clog the Deal Lake flume in Asbury Park and prevent fishing from spawning.

The Army Corps also wants to notch around six jetties between Asbury Park and Long Branch. About 100 people attended a rally March 2 at Deal Lake to protest plans to replenish a 3.5-mile section of beach stretching from Lake Takanassee in the Elberon section of Long Branch to Deal Lake.

“Our main concern is a free-flowing flume to the ocean in the future. What happens (if it clogs)? Who’s responsible?” asked Deal Lake Commission Chairman Don Brockel.

Brockel said the beach replenishment project needs to be “well thought out and planned” and that vast amounts of sand are just migrating north and increasing the size of Sandy Hook.

“Sandy Hook will be the biggest beach ever and we can eliminate the Verrazano (Narrows Bridge) and walk straight across to New York,” he said.

Loch Arbour resident William Rosenblatt said that when the first beach replenishment was done in the late 1990s that notching the jetties was supposed to be an experiment to test the Army Corps’ notching theory.

“Show me the data. I am a data man so just show me the data,” he said. “This is too unique a resource to have somebody blindly mess with it.”

Congressman Frank Pallone Jr. said in a prepared statement read to the protesters that he encourages people to contact Amy Corps and voice their concerns.

“I encourage all of you here today to formally submit your concerns and comments on this project in writing if you have not done so. I am discussing this issue with the Army Corps of Engineers and trying to find a resolution that does not negatively impact fishermen in the area,” he said.

“They are planning to monitor the flume and clear any sediment buildup that occurs throughout the project. We will also look at the possibility of reconfiguring the placement of sand in the area adjacent to the flume. One long-term solution may be to extend the Deal Lake Flume to limit the amount of sand that can block its flow,” he said.

Pallone said that the buildup of sediment in Deal Lake from Superstorm Sandy is another issue that must be addressed.

He said that that $1 million in federal funds has been allocated by the Natural Resources Conservation Service to remove sediment from the lake.

“I understand this will not address all of the sediment buildup in the lake and will look into the possibility of additional state funds for this work,” he said.

The Deal Lake Commission is currently seeking $6.9 million in federal aid to clear the lake of sand.

Joseph Pallotto, president of the Asbury Park Fishing Club, urged protesters to keep the pressure on the Army Corps by voicing their concerns through e-mails.

“Let’s keep it rolling and not let the Army Corps bulldoze us over,” he said.

Pallotto said previously that a similar problem developed at the Deal Lake flume when the first federal beach replenishment project was done in the late 1990s. The project not only impeded the flow of water from Deal Lake into the Atlantic Ocean but also prevented spawning herring, shad, and white perch from entering the lake to breed.

Congressman Frank Pallone Jr. intervened during the first replenishment project and obtained an $8 million federal grant to extend the flume.

Top of page – Deal Lake Commission image of the lake today. Below – Postcard of Deal Lake in days gone by. 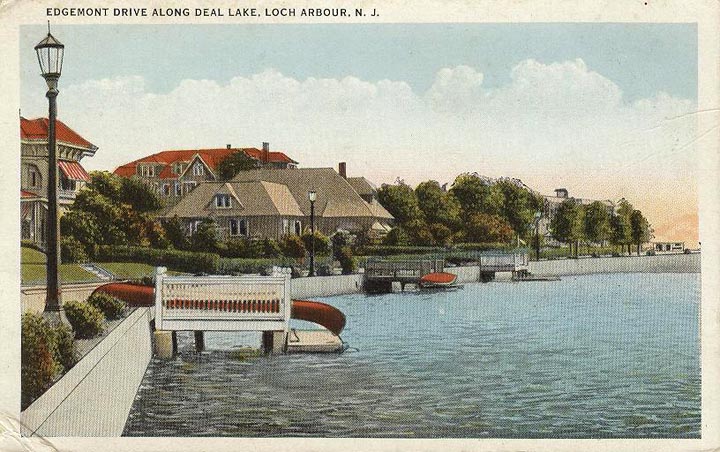