Want Special Backstage Seating? See a Concert at the Paramount 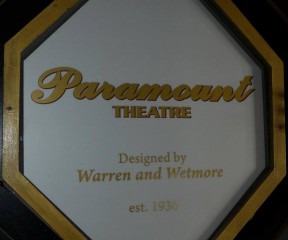 If you ever wanted to be onstage or backstage during a concert by your favorite performer, then you might want to check out the unique concert series beginning at the Paramount Theatre in Asbury Park.

The “Where The Audience And The Music Share The Stage” series begins Sat., June 13 with a peformance by Williams Honor on June 13. The series is followed by Graham Parker on June 27; Marshall Crenshaw on July 25; and Loudon Wainwright III on Aug. 22.

Concert promoter Sammy Boyd of Allenhurst said that the 200 limited-seating audience will actually be backstage and on the stage during the performance in a 1,600-seat theatre that has a very rich history of famous musical performances.

“So many people want to be onstage or backstage and having a limited number of 200 people gives them that opportunity,” he said.

He said the audience will be at the back of the stage and face an empty hall during the concert, with the band in front of them.

“They will see the theatre empty, chandeliers and all and everything will be dimly lit,” he said.

Boyd said the concept came to him after seeing a similar show at the Strand Theatre in Lakewood.

“I thought this is very cool and I would love to do it at the Paramount. And, before I knew it, (boardwalk redeveloper) Madison Marquette also loved it and we started to book a bunch of great talent,” he said.

Boyd said there are also other concerts currently in the works and tickets range from $25 to $40, depending on the act.

He said everyone attending will only be admitted through the private stage entrance on the northern side of the theatre and everyone will be given a special laminated “Backstage Pass.”

“Everybody should have a unique experience and have that special feeling of being on the stage. And once that’s gone- it’s gone,” he said.

The joint venture between Madison Marquette and Sammy Boyd Productions will present a unique mix of local, national and international talent. Each show will have general admission seating for 200, a bar, and a snack shack- all set up on the stage.

“When the idea of presenting this type of music experience came along, everyone agreed it belonged in Asbury Park,” said Boyd’s assistant, Judi Yaccarino.