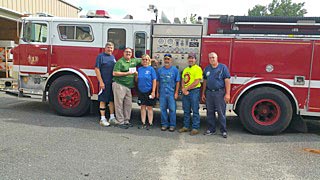 A second-hand fire truck headed out from Neptune July 21 for an 18-hour drive to Missouri- giving a fire company there a piece of equipment that members there desperately need.

A 1999 Mac pumper truck, originally from the Hamilton Fire Department, has been donated to the Lancaster Fire and Rescue in Missouri.

“We love helping these guys out. This equipment to them is golden,” said Shark River Hills Firefighter Joseph Malysko.

Malysko said that some of the fire equipment in Missouri is just a pickup truck with a water tank and a pump.

“When they get something like this, it’s special and definitely going to someone who really needs it,” he said.

Malysko said that area fire departments have also donated other equipment to Missouri in the past, including a 1973 Pierce pumper from Bradley Beach.

Jason Watson, who is the Lancaster district’s fire chief, said that this truck will replace an old 1965 truck.

“Our truck is really tired and, without this new truck, we are pretty much sunk,” he said.

Lancaster Fire and Rescue has about 17 volunteer firefighters and covers an area of about 130 square miles. Its annual operating budget usually ranges from $7,000 to $14,000, which comes mostly from membership dues and contributions.

“The men in the department are excited to get this truck and we have been working on this for about two months now,” he said.