The Weeklings: Inspired by The Beatles 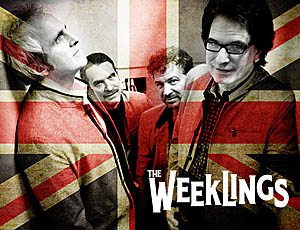 Strongly inspired by The Beatles, The Weeklings are about to release a highly-anticipated second album entitled “Studio 2”- an album that will take the listeners on a sonic journey that evokes the kind of excitement contained in early Beatles recordings.
To create their new album, The Weeklings flew to England to record at Abbey Road Studios in June. They discussed ideas with former Beatles recording engineers Ken Scott and Alan Parsons and then actually recorded in the same room, called Studio 2, where The Beatles had worked with the legendary producer George Martin.
The album, released by Jem Records, contains eight new Weeklings’ songs and four ultra-rare Lennon/McCartney bonus tracks.
A special album-release concert will be held Fri., Nov. 11 at the House of Independents, at 572 Cookman Avenue in Asbury Park from 8 to 11 p.m. Tickets are $20 in advance; $25 at the door, and $35 for VIP seating. Tickets can be purchased at The House of Independents or at www.ticketweb.com
The Weeklings are “Lefty Weekling” Glen Burtnik (bass guitar/vocals/ songwriter);”Zeek Weekling” Bob Burger (rhythm guitar/vocals); “Rocky Weekling” John Merjave (lead guitar/vocals); and “Smokestack Weekling” Joe Bellia (drums, vocals).
Special guests at the concert include Emily Grove, Remember Jones, Reagan Richards, and Jillian Rhys McCoy
“Some (Lennon/McCartney compositions) are only now seeing the light of day as finished recordings,” Burger said. “The album completely embodies the magical legacy of the original British Invasion. We recorded all tracks live, standing where The Beatles stood, with all vintage 60’s equipment, all in 2 days!”
Studio 2 will be released on Nov. 18. Advance orders began Oct. 14. Pre-ordered albums include the option to automatically download a double A-sided single, “Don’t Know, Don’t Care” and “Little Elvis.” The release will be available as a CD, LP, and Limited Edition cassette with addition. For more information go to www.weeklings.com
The band’s debut album, “Monophonic” received heavy rotation on many radio stations since its release in March 2015. The song “You Know What To Do” earned the title of “Coolest Song in the World” on Sirius/XM’s “Little Steven’s Underground Garage” channel. In addition, The Weeklings recorded an hour long “Loft Session” for legendary DJ Mike Marrone on Sirius/XM Channel 30.