Neptune Cemetery to Revert Back to Township 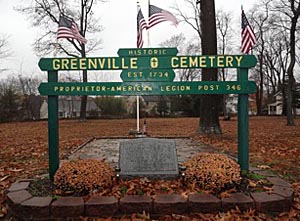 Neptune’s historic Greenville Cemetery, which dates back at least to the Revolutionary War, will go back to being owned by the township after a local veteran’s group said it can no longer take care of heavy maintenance at the site.
“Maintenance has been a problem for them and the township has no problem taking it back and maintaining it,” Township Business Administrator Vito Gadaleta said at Monday’s Township Committee meeting.
The cemetery, at the intersection of Gully Road and Old Corlies Avenue, was long neglected until resident Gary Crawford and others decided to clear it out in 2001. He said that Civil War soldiers and even some as far back as the Revolutionary War or even earlier are believed to be buried there. About 18 volunteers showed up one the first clean-up day to pitch in and bring the cemetery back to public view.
He said that about 30 graves were identified on the site due to the depressions in the ground but that no gravestones were found.
“In those days they probably used wooden crosses in this area,” he said.
In November, 2002 the local American Legion Post 346 had taken interest and purchased it from the township for $1 so that the post could maintain and oversee the graveyard. But the post realizes it does not now have the capability for maintaining the site and is requesting the township buy it back for $1.
Any abandoned cemetery reverts to the local government if it is abandoned, Crawford said.
“I think the township should take care of this,” Committeeman Robert Lane Jr. Lane said.
“It’s time to take it back,” Deputy Mayor Michael Brantley said.
Gadaleta said that the American Legion’s aging membership and costs to maintain the cemetery are all factors but that veterans do still want to remain involved.
“They still want to be participants by doing plantings, light maintenance, and placing flags,” he said.
Gadaleta said the Greenville Cemetery nicely compliments the township’s new Veteran’s Park on Old Corlies Avenue. He said that the township would like to seek out more records on the cemetery and even consider using ground-penetrating radar to learn more.
“That would be terrific,” Crawford said.
He that he Greenville Cemetery is a Presbyterian cemetery and that a church next door is no longer there.
He said that a request for information about the cemetery from the Presbyterian Church archives in Philadelphia brought no results but that perhaps the township can do better.