Women and girls of all ages converged on Lake Avenue in Asbury Park Jan. 21 to have their feminine voices heard in solidarity with the other Women’s Marches around the country.
They came with their their girlfriends, their boyfriends, their mothers, their children. They linked arms with strangers and they shouted out joyfully along the route in support of women’s rights to health care and equal pay.
Amanda Kane, one of four women who organized the city’s event in only seven days, spoke before the march saying the number of people assembled spoke for itself with police estimating the total at 6000.
The other organizers were Dallas Hlatky, Daniele Fiori and Jennifer Lampert, co-owner of the Asbury Festhalle and Biergarten Biergarten on Lake Avenue where the march began.
People came from surrounding towns, many of whom had planned on going to Washington, New York City or Trenton but changed their plans just days before deciding to stay local. They came with their children in strollers and the frail in wheelchairs.
Julie Spector, 24, who grew up in Ocean Township and now lives in Jersey City, returned to the shore to join the march.
“I feel really passionate about human rights…women’s health, climate change,” she said.
Nan Davis, a resident of Francis Asbury Manor in Ocean Grove, said she had just heard about the march on Thursday at the Neptune Senior Center and knew she had to be there.
Donna Harrison, owner of Chocolate Sage on Main Street in Asbury Park, was there and was astonished at the number of people gathering on Lake Avenue.
“This morning I heard their were 4300 people, but this is definitely more,” she said.
Kane spoke to the crowd before the march began explaining what she felt it meant that so many were assembled in such a short period of time. 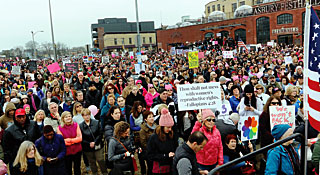 “That we are not alone in our feelings, we will stand together in sisterhood, unity, we will lift each other up. I hope this feeling makes you feel empowered, strong and feeling love,” she said.
Hlatky lead the group in taking the Citizens Oath which was a variation of the presidential oath taken by Donald Trump the day before.
“This country has always relied on its citizens to stand up for what’s right. This is a country founded on the idea all are created equal, that’s why we are here today,” she said.
Board of Education President Angela Ahbez-Anderson then took the microphone to read the poem “Human Family” by Maya Angelou.
“We are family, when someone in your family needs you, you go to them. We are brothers and sisters,” she said.
Kane then took the mic as the walk began with the chant “There are 300 million of us and we are fired up and ready to go,” as Stevie Wonder’s song “Isn’t she lovely” played over the loudspeakers.
As marchers headed toward the boardwalk they were led in chants including “Yes we can” followed by “Lock him up, yes we can” a parody of Trump supporters’ calls to lock up Hillary Clinton.
Walkers made their way up to the boardwalk, heading north to Bradley Park where a stage was set and speakers were ready to make their remarks.
Mayor John Moor welcomed everyone before promptly handing the mic over to Councilwoman Eileen Chapman saying “This is a day for women.”
Chapman gave an emotional welcome and thank you to all who showed up while Councilwoman Yvonne Clayton told the crowd, “I’m very proud of you, thank you all for coming.”
But it was Councilman Jesse Kendle who lit up the crowd saying “Give yourselves a hand and let them hear it in Washington.”
He also asked all to raise their hands while saying “hallelujah.”
“Don’t let anybody bring you down. You don’t know what the coming years will bring, but we will overcome,” he said.
Deputy Mayor Amy Quinn was the only council member not there but only because she was marching in Washington.
When she returned Quinn said, “On November 9 Teresa Shook, a retiree from Hawaii who was devastated after Hillary Clinton lost the election, invited a handful or so of her friends to march in Washington. An event that started like that and blew up into one of the biggest marches ever was something I was so happy to be a part of. Seeing lines of senior women in walkers, families with their kids, and people from all walks of life in DC supporting women’s rights was an amazing experience. And what made it even more amazing is the fact that Asbury Park hosted a sister march at the same time.”
Rev. Gilbert Caldwell also spoke and said he has not felt “this way” since he marched with Rev. Dr. Martin Luther King during the 1960s civil rights protests.
He said he was marching for the women in his life including his wife, daughters and eight year old granddaughter.
“We are turning the world upside down so we can turn it right side up. Sing so the racists can hear you, even if they are in the White House,” he said.
Congressman Frank Pallone said, “We stand with our citizens, millions across the nation and the world. Many different gender identities, ethnicities, languages who came together for human rights.”
He called the event “amazing” and urged people to not let it stop here but to call and write their lawmakers to protest loss of funding to Planned Parenthood and threats to the Affordable Care Act.
Assemblywoman Joann Downey spoke about equal pay for women, saying as an attorney she is still paid less and often mistaken for a court clerk when she goes to the courthouse.
Rosemary Wright of Ocean Grove took the Bus for Progress to Washington to march, leaving at 6 a.m. and not getting back until 11 p.m.
Wright stressed the peaceful and positive atmosphere at the march where officials estimated there were more than 500,000 marchers.
“There were so many women, it was not a protest, it was not anti-Trump,” she said. “It was about kindness and civility…and women’s rights are human rights,” she said. “It was such an inspirational high.”
Rosemary Venter of Bradley Beach decided to stay local with Ocean Grove friend Serena Norall.
As a Queens native Venter had originally planned to march in New York.
“I heard that Monmouth County went Republican this past election but you could not tell from the over 6,000 persons who were present at the Asbury event. There were so many creative signs and so many smiling faces, all races, ages and genders,” she said.
Norall summed up the atmosphere of peace, friendship and excitement expressed by many.
“I never thought I would ever march for anything. I was raised in Bay Ridge, Brooklyn in the Norwegian community and we marched in our Nordic attire as kids. Did I think at age 75 I would march in any kind of parade…no way. I have two artificial hips and thought if I wanted to complete the march I needed the assistance of my old walker. I felt like I was floating rather than walking,” she said.