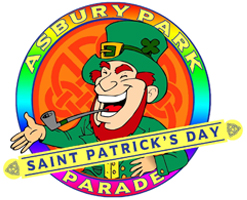 The fourth annual St. Patrick’s Day Parade in Asbury Park this Sunday, March 12 is shaping up to be one of its biggest yet.

“They came from all over, North Jersey, South Jersey, Trenton,” he said. “Every year, it’s been growing. We expect even more this year.”

Giberson thanked parade sponsor John McGillion, owner of Johnny Mac House of Spirits, who is also on the parade committee, for his dedication and support for the parade.

“He has been a tremendous advocate,” Giberson said.

Giberson said there will be six mummer bands from the Philadelphia area marching, along with the high school bands from Asbury Park and Ocean Township.

“There will be lots of entertainment  and floats,” he said.

Leading the parade with be Grand Marshall Caroline O’Toole, manager of the Stone Pony.

Bagpipers from around the state will also be marching as well as Kazooers , zombies and dogs.

Student groups and the Asbury Park Education Association will also be marching.

The Stone Pony will also have a musical float as always, as will Paradise and Georgie’s.

The parade begins at 1 p.m. on Sunday, March 12 at Fifth and Ocean avenues and follows the parade route up to Cookman Avenue before ending at the municipal building.

“Let’s hope for good weather. No rain or snow. But either way the parade will go on,” he said.