Here are just a few additional reminders highlighting things to do in and around Asbury Park this week…for a complete rundown of music, movies, art, theater, words and MORE, check out the weekly WHAT’S UP section, ONLY in the printed pages of THE COASTER!
SCENES: A downtown Devil  of a Festival
It is decreed, by proclamation of the Mayor of AP: the Jersey Devil is the official cryptid of Asbury Park. And not a moment too soon, as Kathy Kelly of the recently re-opened Paranormal Books and Curiosities has staked out this very weekend to honor our homegrown haunter of the deep dark pines (and a few roadside rest stops), with a Jersey Devil Festival that offers all due sympathy for the Devil by folding in film, art, spoken word, scholarly study, and a cloven-hoofed cavalcade of activity along the Cookman Avenue corridor.
Having added a whole new dimension to the local year-end holidays through her annual Krampus Festival, the mistress of the arcane and eldritch hosts a salute to the Garden State’s proprietary gargoyle that begins in earnest on Friday evening, April 6 at The ShowRoom. It’s there that a one-night-only Jersey Devil Film Festival unspools at 7:30 pm, with a selection of Devil-themed short subjects followed by a 20th anniversary screening of The Last Broadcast, the ultra-indie horror epic that staked a claim to being the first feature shot on handheld video camera and edited on a desktop suite. Director Lance Weiler joins Asbury Park Press correspondent Alex Biese for a live discussion of the 1998 film, during the program for which tickets ($10) are available at theshowroomap.com.
Then on Saturday, April 7, the legend and legacy of the Jersey Devil — from the storied spawn of Mother Leeds, to such cryptid cousins as The Big Red Eye — takes center stage in and around the all-new Paranormal Tower at 621 Cookman. Beginning at noon, attendees will thrill to a Devil-themed Hall of Images exhibit, author/ storyteller readings, lectures on our state’s freakish folklore, plus contests (tattoos, stories, posters, and costume contest at 4 pm), free walking tours of haunted history — and, at 4:30 pm, a March of the Jersey Devils to a Summoning Site at which “competitors will hoot, howl and growl…enough to wake the Jersey Devil!” The devil, as they say, is in the details…and the details are there for the searching, at paranormalbooksnj.com (events are free, but registration is recommended).
STAGES: LaStrada brings ‘Destruction’ to JSAC
One of the area’s best-kept-secret showcases for new original stage works is happening within the halls of a high school — the old Neptune High School, that is; alma mater of Tony winning lyricist Lynn Ahrens, and a place rebranded in recent years as Ocean Grove’s Jersey Shore Arts Center. It’s there that La Strada Ensemble Theater has made a home for itself, with the collective of Shore-based playwrights and performers having workshopped and debuted dozens of full-length and short works for the stage. On Friday, April 6, it’s Brick Township playwright Darren Debari’s turn in the spotlight, as the troupe presents its premiere production of the drama Destruction of the American Male. La Strada artistic director A.J. Ciccotelli stars as a hard-drinking actor turned stockbroker who’s had (and lost) it all more times than once, with Lite-FM radio personality Christine Nagy co-starring in the play that takes an unflinching look at the relationships, personal demons and identity crises that define men in 2018 America. Evan Black (who also appears in the supporting cast) co-directs with Donna Ault Jacobson, and “Male” call is at 8 p.m. Friday and Saturday, with an additional 7 p.m. show on Sunday, April 8. Tickets ($25; senior and student discounts) can be reserved here or by calling 732-455-2748.

Above – A.J. Ciccotelli and Christine Nagy co-star in the La Strade Ensemble premiere of DESTRUCTION OF THE AMERICAN MALE, one weekend only at Jersey Shore Arts Center.  (photo by Laura Desantis-Olsson)
SOUNDS: Karen Mansfield record release
Arriving during a spring interlude that’s taken its sweet chilly time getting springy, Karen Mansfield‘s Thistle & Boon serves as an elegantly rocking reflection — whether by happy accident or intelligent design — of the seasonal and emotional climate we’re in. On her first full-length album release, the Shore-based singer/songwriter who once fronted a fun punk band called The Bleeding Knees continues her evolution into a writer of plain-spoke sophistication and a vocalist of genuine depth — crafting a set of originals that begins in a moodier, almost ghostly vein (“Lover for the Ride,” “Gone”), and accelerates to its destination with upbeat sixties-style poppers “New Favorite Thing” and “You Make Me Happy.” From chilly to chipper; in other words, kind of like springtime itself. A staple on Asbury-area stages and a collaborator with countless scene artists, Mansfield (who previewed the new disc at the Wonder Bar last weekend) marks the official release of Thistle & Boon with an Asbury Park Yacht Club outing; a Friday night affair that further features Bruce Tunkel and Where’s Tino?
SOUNDS: The songs of Fred Astaire
Granted, he’s not remembered primarily as a singer — in fact, he considered himself to be nobody’s idea of a vocalist — but the fact remains that the greatest composers of the Tin Pan Alley era agreed on one thing: when there was a classic song to be introduced, Fred Astaire was the man for the job. From Irving Berlin (“Puttin’ on the Ritz”) and the Gershwins (“They Can’t Take That Away From Me”) to Jerome Kern (“The Way You Look Tonight“), Cole Porter (“Night and Day”) and the team of Schwartz and Dietz (“That’s Entertainment”), the authors of the Great American Songbook favored the man in the dancing shoes and his easygoing, unaffected singing style with their most timeless masterpieces — and on Sunday, the Axelrod Performing Arts Center pays tribute to a generation of awesome artists with Let’s Face the Music: The Songs of Fred Astaire. Esteemed oncologist (and merrily moonlighting jazz cat) Dr. Art Topilow leads a concert band that includes violinist Aaron Weinstein, with Danny Bacher and Alexis Cole sharing vocal duties on the big bandstand.
SCREENS: “Mildred” and Marilyn, at the Crane House
It’s about newfound empowerment…business success…financial independence…inter-family tensions…murder, lies and PIES…so many, many pies. 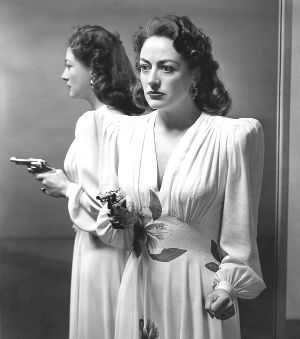 When Asbury Park’s Mayor Emeritus Ed Johnson returns to the historic Stephen Crane House (508 Fourth Avenue in AP) this Saturday, April 7 for the final entry in his winter/spring slate of “Lights! Camera! Politics!” free screening events, he’ll be closing out the season of “Empowerment” with the film that served to re-energize the career and clout of one of Hollywood’s most legendary female stars…Joan Crawford. As the title character in the 1945 Warner Brothers classic Mildred Pierce, she commands the screen in the role of an abandoned wife who attempts to do right by her two daughters, by parlaying her home cooking into a lucrative chain of restaurants.
All is not peachy, however, in the film that’s freely adapted from the novel by James M. Cain (Double Indemnity) and directed by Michael Curtiz (Casablanca). Poor Mildred must contend with the suspicious motives of the men in her life, stay strong against devastating tragedy…and deal with her ungrateful offspring Veda (Ann Blyth, in the mother of all “daughter dearest” roles), a social climber who considers her self-sacrificing mom a “common frump” that smells of pies and grease. Throw in a pivotal shooting that’s not in the original book, and you’ve got a sleek, noir-infused soap opera with plenty of surprises and some dynamite performances in the vintage Warners style.
Joining Mayor Ed as special guest presenter for the 3 pm screening is another pleasant surprise: Marilyn Schlossbach, herself a locally legendary chef/ restaurateur (and mom to twin daughters) who’s also a film fan, a surfer, and a tireless activist for numerous community causes. Doors open at 2:30 for the Saturday matinee showing of Mildred Pierce…as always, there’s no charge for admission and complimentary refreshments will be served, with attendees invited to donate by cash or check to our friends at the Asbury Park Little League.