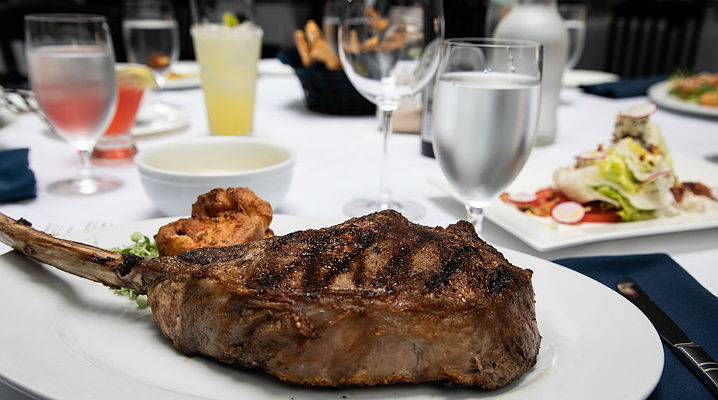 Chef John D’Amelio is looking forward to a busy summer at the new AP Chophouse restaurant in the Berkeley Oceanfront Hotel in Asbury Park.

The restaurant has actually been open for several weeks under the direction of  D’Amelio. He and his staff had a quiet opening to get things right in running the first full service restaurant at the Berkeley in several years. Located off the main lobby at the east end of the hotel, the 180-seat Chophouse has a formal dining room and an outside patio for dining as well as a full bar.

As might be expected, the main course at the Chophouse is steak. D’Amelio said the menu features USDA Dry-Aged prime beef, including a 40-oz “Tomahawk” Rib eye for two and a 44-oz Porterhouse for two. Seafood and pasta dishes are also on the menu as well.

“We are on the Jersey Shore,” he notes.

Dinner service starts at 5 p.m. but the Chophouse also has a buffet breakfast and lunch and both are open to the public.

D’Amelio is well aware of Asbury Park’s reputation as a place with many fine dining choices and acknowledges the many great chefs working in the city. It’s very competitive, he said but people take an interest with so many choices.

“It’s not the Asbury Park I remember,” he said.

Born and raised in Fair Haven, D’Amelio began his career as a teenager at the Fairwinds Deli and worked at The Cove in Sea Bright and former Ocean Place Hilton in Long Branch. He then worked at the View at the Marriott Marquis in Manhattan. Most recently, he spent 12 years as the Corporate Chef at the Cuba Libre restaurants in Philadelphia.

The quiet opening at the AP Chophouse is over and D’Amelio is ready to step up the promotion with advertising and a social media presence. The Chophouse website is now live at www.APChophouse.com.