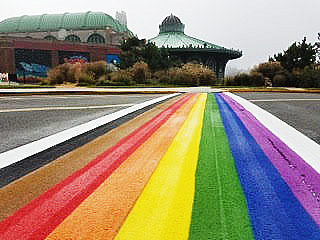 The City of Asbury Park has unveiled a new rainbow-striped crosswalk on Asbury Avenue in front of the Empress Hotel. The temporary crosswalk was created by resolution to promote awareness of LGBTQ issues in Asbury Park and timed to coincide with Garden State Equality’s Equality Walk, which will take place on Saturday, October 13, 2018.

“We wanted to do something special  to show our support for the LGBTQ community, and for Garden State Equality’s Equality Walk, and we took a cue from Maplewood who was the first municipality in New Jersey to do it, “said Deputy Mayor Amy Quinn, “Mayor Moor and Council were quick to support the decision. We hope residents and visitors will see it as more than just a symbol of gay pride, but also as a celebration of the City of Asbury Park being home to one of the most diverse communities in the State of New Jersey.”

“The City of Asbury Park is committed to inclusion,” said Mayor John Moor, “and in a time where there seems to be a lot of division and hate, we hope that the new rainbow crosswalk will serve as a daily reminder to treat all people with respect, in addition to serving as a tribute to the ever-growing diversity and acceptance that our City is known for.”

“We’d like to thank City officials for continuing to support the LGBTQ community in Asbury Park,” said Christian Fuscarino, Executive Director of Garden State Equality,” It’s more important than ever to focus on inclusion and being that October is LGBTQ History Month, this crosswalk painting is very timely.”For more information on the City of Asbury Park, visit www.cityofasburypark.com.