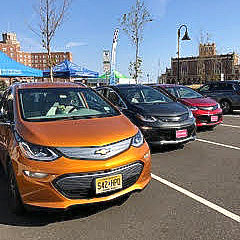 Asbury Park continues its march toward initiative and innovation with the introduction this week of an electric car and car share program demonstration.

Elected officials, speakers and residents had the opportunity to take a test drive of either a Chevy Bolt or two BMW models.

At the opening ceremony many spoke of Asbury Park’s commitment to sustainable energy and forward thinking in bringing new programs to the city.

Assemblyman Eric Houghtaling said, “So many great things are happening here. We have a president in Trump who wants to resurrect the coal industry…combustion that comes out of cars is not good for anybody. We only have this planet once.”

Deputy Mayor Amy Quinn praised the efforts of Director of Transportation Michael Manzella who worked to bring not only the electric car program but the bike share and jitney programs to Asbury Park.

Calling them ideas that make getting around the city have a much easier flow.

She said she recently drove her daughter’s Tesla and vowed to make that her next car.

Manzella, who has been at his post for two years, said he came here to address the parking problem but said it’s a two fold project.

“I came here to make parking easier but we can’t just add more parking we have to decrease the need,” he said.

Shared and sustainable modes of transportation is the goal Manzella said, adding that a large portion of the city population do not own vehicles.

The car share program, which will start early next year, will provide cars and charging stations in three locations throughout the city.

Riding an electric car is similar to a gasoline car in many ways but different in many others.

In the Chevy Bolt the dashboard is totally digital and there is no engine noise, so it’s hard to tell if it’s even on.

The breaking system is also very different and the driver feels a drag when they take their foot off the accelerator.

There is also a lever on the back of the steering wheel that brakes the car, but drivers need to be mindful that the brake lights do not come on using the lever.

Tom “Tippy” Timpanaro of Circle Auto Group, who accompanied me on my test drive, said the goal is to have drivers use the lever as much as possible to reduce the amount of electricity needed and for less wear and tear on the braking system.

In low gear the car slows down on its own when you let up on the accelerator.

Electric cars also don’t have muffler systems and other parts that need to be replaced on gas powered cars.

“All you really need to do is rotate the tires,” Timpanaro said.

Pamela G. Frank of ChargEVC said there is new legislation being discussed in Trenton to provide rebates to those purchasing electric cars and to install 600 fast charging stations throughout the state so drivers could find a station within 25 miles.
“That would take care of range anxiety, drivers would have to go no more than 25 miles to recharge,” she said.

She said the bill also addresses awareness and education about electric cars.