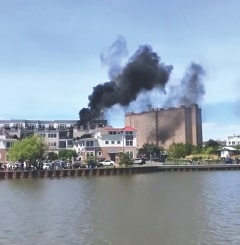 Oily rags left on the exterior patio of a third-floor unit at the Wesley Grove apartments, near the beachfront in Asbury Park, are the main suspect as the cause of a fire that was quickly extinguished by local firefighters Sun., May 26.

“The official report says the fire was accidental but we cannot rule out oily rags that were left out on the deck,” Asbury Park Fire Chief Kevin Keddy said on Wednesday.

The emergency call about fire came in around 2:10 p.m. and firefighter were on the scene within four minutes.Fire departments from Asbury Park, Wanamassa, Neptune and Glendola responded to the scene, which was only about a block away from the boardwalk crowded with Memorial Day weekend visitors.

No one was home in the unit where the fire started. Residents were all evacuated.

Keddy said the fire started on the deck of the third story unit and the heat eventually splintered the glass on a sliding glass door and the fire moved into the apartment. The sprinkler system was then activated, which helped suppress the flames.  The fire also spread into an upper unit, where the damage was less severe.

Fatal Shooting in Neptune Under Investigation by County Prosecutor