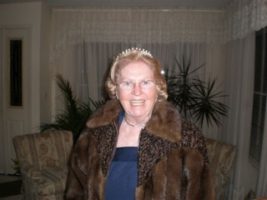 Joan Flatley, who served as the executive director of the Asbury Park Chamber of Commerce and kept it operating when not many tourists visited the city, died May 7. She was 91.

Those who knew her, and there are many including mayors, council members and business owners, describe her as an angel, a second mother and a leader.

“My mother’s name was also Joan and I called her Mama Joan,” she said.

When Donofrio became chamber director in 2007 she said Flatley immediately became her mentor.

“She came to the meetings, she was my mentor, she taught me everything you couldn’t learn in a book,” she said.

D’Onofrio said her favorite memory with her friend was a trip they took to Atlantic City with the top down on Donofrio’s convertible, and both of them wearing huge pashminas and big sunglasses riding down the Parkway.

“We said we were Thelma and Louise,” she said.

The night before Flatley died she called D’Onofrio before going to bed just to chat.

“She was sharp right up to the end…I believe she had a premonition, I believe she wanted to touch base….I’m so glad I had that chance to talk,” she said.

Most of all “she’s going to be missed,” she said.

She served as chamber director during the lates 1980s and early 1990s when the city was experiencing hard times.

“She was and is an angel, who always put the city first,” Moor said. “Joan was a friend for may years. The Chamber of Commerce and the City DPW/Beach Department shared our offices in the building across from the Carousel and Empress.”

Moor said in his conversations with Flatley, Asbury Park was always on her mind.

“Joan and I spent many an hour talking about the city and its past, present, and future. Never once did a negative word come out of her mouth. All I can say is another old timer who got us where we are is gone but should never be forgotten,” he said.

“I can’t even find suitable words to express my profound sadness on the passing of Joan Flatley. Joan and my father were acquaintances in Jersey City decades ago so we had already met when she became the Director of the Asbury Park Chamber of Commerce.

“I knew she was perfect for the position, exuberating warmth and knowledge that inspired confidence while motivating business owners and community leaders to join her in promoting the city that she so loved. I don’t know of anyone who so effectively advocated on behalf of a community, in dark times and good times, than Joan did.”

Chapman also said she was always impressed by Flatley’s knowledge of the city’s history and admired her keeping current on business and culture as the city experienced its rebirth.

“She always knew as much about the city’s history as she did the present day civic, business and cultural topics and her leadership was truly needed during those years. Most importantly Joan had an entertaining sense of humor that captivated everyone,” she said.

Chapman also recounted a story about a Swedish man’s visit to Asbury Park in the 1980s.

“A few years ago I received an email from a man who had visited Asbury Park from Stockholm in the 1980’s. He was a music fan who wanted to visit the ‘music mecca’ of the Jersey Shore.

“He wandered into the Chamber office and spoke with Joan who helped him make arrangements for lodging and meals. He ended up staying for the entire summer and returned again the following year.

“Over 30 years later he just wanted me to know what an impact his visit had and how grateful he was to Joan for her guidance. Joan will always be remembered for the mark she left on each individual and on an entire community,” she said.

Sylvia Sylvia-Cioffi, executive director of the Asbury Park Chamber of Commerce said Flatley set the bar for those who followed her to uphold.

She said in recent year Flatley would regularly come into the office to help out in any way she could.

“Joan would work stuffing invoices into envelopes…we would schedule our day around her visits,” Sylvia-Cioffi said. “And her stories, her mind was a steel trap and she would talk about the history… and she would share dirt which was really fun.”

Flatley would also call from time to time.

“She kept me updated on everything,” Sylvia-Cioffi said.

She would take the roster and call new members or old members to catch up.

“She had an indomitable spirit, that spirit is what lives on,” Sylvia-Cioffi said.

Speaking of Flatley’s long career at the chamber, Sylvia-Cioffi said thinking of all the ups and downs the city has faced the past four decades, “There was nobody better than her to be executive director.”