This car is believed to have been used by subjects in a home invasion robbery in Long Branch. 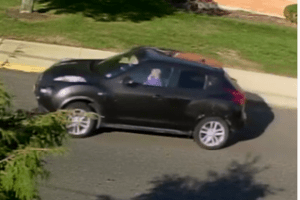 Long Branch Police Department responded to a 4:39 p.m. report of a home invasion robbery at 349 Willow Ave. on Oct. 5, 2020. Police arrived at the scene to find the victim injured and immediately had him transported to an area hospital.

A joint investigation by the Monmouth County Prosecutor’s Office and Long Branch Police Department uncovered photographic evidence that could aid in identifying those responsible for the crime. The photographs reveal four subjects arrived at the location in the  car believed to be a dark in color Nissan Juke. Two of the subjects followed the victim into his residence and proceeded to assault the victim.

Two subjects who followed the victim into the residence, while the other two subjects remained in the car. The driver appears to be light in complexion possibly white or very light skinned.

Anyone with information about the incident or who may have information to identify any of the subjects or the vehicle are urged to contact Detective Stephen J. Cavendish of the Monmouth County Prosecutor’s Office, Major Crimes Bureau at 732-431-7160 ext. 7051 or Detective Todd Coleman of the Long Branch Police Department at 732-222-1000.

Anyone who feels the need to remain anonymous but has information about a crime can contact Monmouth County Crime Stoppers confidential telephone tip-line by calling 1-800-671-4400; or, they can post their tip at https://www.p3tips.com/1182