In Ocean Grove: Vintage Bathing Costumes on Display at Museum 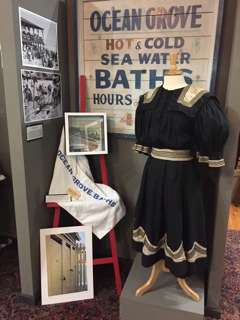 The Ocean Grove Historical Society Museum has opened for the season with a new exhibition of bathing costumes from the 19th century and early 20th century, as well as two other exciting exhibits.

The History of Ocean Grove, the permanent and primary exhibit at the museum at 50 Pitman Ave., has been refurbished and will soon include a section highlighting Architectural Styles:  The Period of Significance, 1869-1910.

1890 in Ocean Grove is explored in an interactive exhibit and looks at what it would have been like to visit Ocean Grove in the summer of 1890.  Visit the museum from Tuesday-Saturday from 10 a.m. to 4 p.m.

“Sun, Sand and Modesty,” the exhibition of bathing costumes includes period costuming, vintage photos, and other antique artifacts from the museum’s collection, as well as several items on loan from the Morris County Historical Society based in Morristown, New Jersey.  The exhibit is curated by Deborah Osepchuk of Ocean Grove.

During the late 1880s, people began to flock to beaches for popular seaside activities. The clumsy Victorian and Edwardian bathing costumes (on display) were often very burdensome.  They were accessorized with long black stockings, lace-up bathing slippers and fancy caps.  Swimwear for men and for children are also featured in the exhibit.

In the early 20th Century a need for a new style bathing suit that retained modesty but was free enough to allow the young woman to engage in swimming were designed. By 1910 bathing suits no longer camouflaged the  contours of the female body. By the early 1920s, women’s bathing suits were reduced to a one-piece garment with a long top that covered shorts.

The exhibit also includes in a special focus on what is called the North End of Ocean Grove and includes a vintage North End sign and beach chair on loan from Bobbie Mitchell of Ocean Grove. At one time, that area included a large recreational complex that included a hotel, swimming pool, special underground access to the beach, a movie theater, bowling alley, and more. Additional information is available by visiting oceangrovehistory.org or calling 732-774-1869.

2019 commemorates two important anniversaries in Ocean Grove. It is the 150th year for Ocean Grove, and the 50th anniversary for the founding of the Historical Society. Since its founding in 1969, the Historical Society of Ocean Grove has pledged itself to preserve, document, and encourage community interest in the history of Ocean Grove. The purpose of this nonprofit Society is to sustain the heritage and honor of being designated a National Historic District.  Ocean Grove was entered as a historic district in the National Register of Historic Places District (1976) and the New Jersey State Register of Historic Places District (1975).