Profile of a Coach

by The Coaster Editorial Staff
in Sports

It didn’t take Brad Currao long to become a champion as a coach.

It was his first year as the head coach of any team.

“Having his experience was very helpful to me,” Brad Currao said. “I consulted with him on a lot of decisions. I handled most of the infielders. He handled the outfielders. We both worked with the pitchers and the hitters.”

Vinnie Currao has an extensive background in coaching and teaching in the Lakewood Township School District. It includes stints as the Piners’ athletics director and head football and head girls volleyball coach.

“My dad went with the old school approach with our team,” Brad Currao said. “I added a twist of the new school approach. Our team bunted the ball and ran a lot. We moved the runners over. We played small ball. My dad was extra tough on our players as he was a football guy growing up. I believe in a looser approach. Let the kids have fun. He got on the kids when he had to. He was the stern voice. I was the calmer voice.”

The Talent Aces won the title with a 7-4 victory over the Southern Ocean Baseball Academy Revolution in the championship game of the playoffs. Outfielder Jake Petro keyed the win with a three-run home run–the team’s lone four-bagger of the season–en route to a 3-for-3 showing at the plate.

“He was such a quiet kid,” Brad Currao said. “He worked hard. He hit well all season. There was a time when he hit either sixth or seventh in the order. We moved him to second place in the order. We wanted him to break out of his shell. When he hit the ball, I said, ‘Double.’ I felt it would be a sure double. The ball kept carrying and carrying.”

Things did not always go well in the Talent Aces’ universe. They lost all three games in a tournament in Pennsylvania during their first weekend of play. However, the team finished the season with an 8-3-1 record. 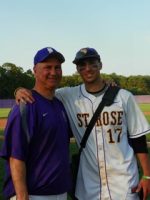 “We lost by seven and eight runs,” Brad Currao said. “When we were 0-3, the boys bought into our style of coaching. They pulled for one another. They did a lot of maturing throughout the season. We got blown out when we were 0-3. During the fourth and fifth weeks of the season, we started to turn things around. Our bats got hot. Early in the year, our defense was sloppy. We had little brain farts here and there. Our pitchers had to work harder and throw more pitches. I don’t know if it was from a COVID-19 hangover or what.”

Brad Currao said the Talent Aces were fun to coach.

“The boys liked to have fun,” he said, “but they were serious when they had to be. That is how I am. I like to talk a lot, but my head is in the game. I told the boys, ‘If you are to enjoy yourselves, let’s do it when you are winning.’ They knew when to take things seriously.”

Brad Currao hopes the players progress as they grow older.

“They are transitioning into high school,” he said. “At this stage, it is about improving their skills. We hope they make their high school teams and get recruited to college. Winning is the extra perk that comes along the way.”

Brad Currao starred on the field and in the classroom at St. Rose and Wagner.

“I enjoyed my St. Rose career,” he said. “When I was in the eighth grade, I thought about attending either Howell or St. Rose. St. Rose was coming off back-to-back state group titles. We did not get that done, but we played in a lot of big games. I played under my dad for four years at St. Rose.”

The good times continued to roll on and off the field for Brad Currao at Wagner College of the Northeast Conference. He was 3-0 with a 4.08 earned run average and placed second on the team in saves (three) as a senior, appearing in 21 games, all in relief. Currao helped Wagner set the team’s single-season victories record (38) and win the NEC regular-season title as a senior.

He earned berths on the NEC Spring Honor Roll in 2014, 2015, 2016, 2017 and 2018. He wound up on the Eastern College President’s Honor Roll in 2018 when he graduated with a degree in business administration with a concentration in finance.

“I chose Wagner because I wanted to be at a smaller school,” he said. “St. Rose was a smaller school and I was accustomed to small class sizes. I liked the Wagner campus. I said, ‘Go to a school you would still go to if you were not playing a sport.’ For our home games and practices, we used the Staten Island Yankees’ field. We had a view of the New York City skyline. I loved the coaching staff, including the head coach, Jim Carone, who also was the team’s pitching coach.”

Accompanied by his mother, Cynthia Currao, Brad Currao made his first visit to Wagner before choosing the school. He has remained in contact with his teammates.

“I have maintained lifelong friendships,” he said. “There were 16 teammates on a golf trip in either August or September of last year to the Poconos. The course was hilly, but the trip was fun, enjoyable.”