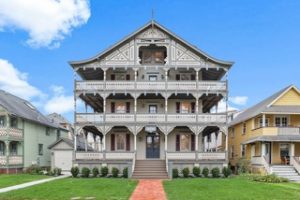 The Aurora, which was a popular hotel near the beachfront in Ocean Grove, has been converted into townhomes.

A former 30-room grand Victorian hotel in Ocean Grove, built in 1884 by sisters from Pennsylvania, has been converted into four townhomes after seeing years of decay and neglect.

The Aurora, 6 Atlantic Ave., now has four new townhomes, with updated amenities and even an elevator, while still preserving its big wrap-around porches and its original Victorian charm.

The Aurora was used in the past as hotel, a bed and breakfast, a rooming house and later as a home for an extended family, all the while it was falling into disrepair.

“Everything outside on the building was rotting and redone, deteriorating sections that were falling down were replaced. We kept the beautiful wrap-around porches, used rough-sawed lumber, and keep the long sweeping rafters. The decks were rebuilt on all three levels using rough-sawed wood and mahogany,” said David Pape, with Old Forge Builders based in Millstone Township.

Pape, who is the owner/contractor of the building, said a lot of the structure is still original, especially the interior floors, roof rafters and foundation. Original joists were also reinforced. Construction began last January after a lengthy review and permitting process.

“The gingerbread trim was deteriorated and we fabricated new trim- it’s a major feature of the building,” he said.

Realtor Mark Bettencourt said that the Aurora faces both Atlantic and Surf Avenues, with similar facades on each side.

“So, the building has two fronts. Everyone is very proud of preserving the history of this building. It took a long time to get the approvals for the project but, at the end of it all, everyone is proud to restore some of the history of Ocean Grove,” he said.