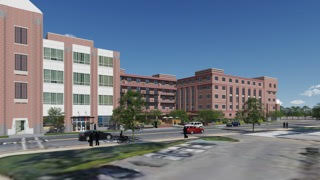 Allenhurst residents got their first look this week at an ambitious proposal to redevelop the long-vacant Jersey Central Power and Light Company buildings, with early plans calling for 69 apartments and 35 high-end townhouses.

Mayor David J. McLaughlin said that the redevelopment project “will be a process” and that there will be much more public input on it. About 50 residents turned out for the public meeting on the multi-million project held at the Hume Street firehouse.

Power Station in Allenhurst LLC plans to convert the existing four-story, Art-Deco-style building on the westside of Main Street into 69 apartments, with many being one-bedroom. Any other structures on the site will be razed and an adjoining building will be built at the northern end of the site, which will have apartments and two levels of off-street parking.

A courtyard will be created in front of the narrow building connecting the two larger buildings. There will be a small restaurant and some retail shops on the first floor.

The old 12,000-square-foot building has been vacant for at least ten years and is “bad shape” with occasional visits by animals and vagrants, developer John Abboud said.

“We want to build a live, work, play community,” he said, adding that the target tenant will be young professionals, especially since the building is only a few blocks from the NJ Transit train station. 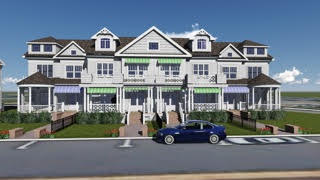 A second redevelopment project will also take place across Main Street, where 35 high-end townhouses will be built on 2.19-acre site at 312-324 Hume Street. They will start at $1 million. The site used to house electrical trolleys in the early 20th century.

The 35 townhouses will be contained in eight separate buildings. There will be four parking spaces, two in a garage, per unit.

Abboud said the townhouses have been designed using architectural elements already found in the borough and that the eight buildings will each look like one large house.

“We want to balance use and density with an artistic feel. We want to keep them in character with the town,” he said.

Residents asked questions about environmental concerns on the old trolley house site and if there are any historic artifacts still on the property. Others questioned if the plan features enough parking and the effect the project will have on the infrastructure and the schools. Some noted that the project would mean additional tax revenue for the borough.

The Power Station corporation is headed by Jon Leidersdorff, owner of the Lake House Music Academy in Asbury Park, and Abboud. The JCP&L buildings are the largest properties in Allenhurst’s Main Street redevelopment zone.

Power Station attorney Donald Pepe said the corporation hopes to close on the property in December or January and start some work in the spring.