by The Coaster Editorial Staff
in Ocean Township

Above and below - Fred Nordensvan

Ocean Township has its own “top shot” and his name is Fred Nordensvan, who has been consistently and accurately hitting the bulls-eye ever since he began shooting decades ago.

Nordensvan, who lives in Wanamassa and has been shooting since high school, decided that this year was the time to go for the gold on the international sharpshooting scene.

For the first time he attended the 41st annual International Benchrest Shooters Competition, called “The Super Shoot,” in North Lawrence, Ohio from May 22-25, where 300 competitors from around world competed for the honor of being the best long-range marksman in the world.

Out of the 20 new shooters in the competition, Nordensvan placed third in that competition.

“Out of all of the competitors, I placed in the top 100. And actually I feel good about that but I want to do better next year. It’s a big international event,” he said. 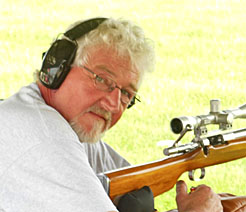 Targets are placed from 100 to 200 yards away and the shooting takes place, rain or shine. And the degree of precision in this competition is so high that Nordensvan makes his own ammunition.

“You can’t buy this type of ammunition. You have to make it from scratch. The standards are so extreme that you have to make your bullets yourself,” he said.

Nordensvan’s custom-made gun, which shoots 6mm ppc bullets, costs about$5,000 and has a scope that is accurate up to 1,000 yards away, or the length of 10 football fields.

And he said there are many other factors that go into getting an accurate shot, from humidity to wind conditions to temperature.

“Everything comes into play. It’s not just about getting out there and pulling the trigger,” he said.

Items like flags and pinwheels are scattered throughout the target range to help a shooter make the proper adjustments. There is also a moving target behind the actual target so that a bullet going into the exact same spot as a previous bullet on the same target can be monitored.

Nordensvan, 62, has lived Wanamassa for 30 years with his wife, Karen. He was in a rifle club when he attended Passaic Valley Regional High School.

While serving in the U.S. Army’s Third Armored Division near Frankfort, Germany in the early 1970s, a call went out for volunteers to enter a marksmanship contest representing the entire division.

“In the Army you learn to never raise your hand for anything but I knew something good would come of this so, when they asked, I raised my hand,” he said.

So Nordensvan stepped forward and became part of the Third Armored’s advanced marksmanship unit. He went on to win his Delta Battery championship and eventually came in second in all of Europe in other Army competitions.

“Once I volunteered and won the trophies, I got to shoot against all other divisions in Europe and that’s all I did for the last four months in the service,” he said.

Nordensvan said he has kept the sport up as a hobby and shoots frequently at the Central Jersey Rifle and Pistol Club in Jackson.

“I kept doing it because I enjoy it…and I plan to do even better in next year’s competition,” he said.